Then he [Jesus] got into the boat and his disciples followed him. Suddenly a furious storm came up on the lake, so that the waves swept over the boat. But Jesus was sleeping. The disciples went and woke him, saying, “Lord, save us! We’re going to drown!”

He replied, “You of little faith, why are you so afraid?” Then he got up and rebuked the winds and the waves, and it was completely calm.

The men were amazed and asked, “What kind of man is this? Even the winds and the waves obey him!” (NIV)

When I was a kid, every evening after supper and the news, I watched a show called To Tell the Truth.  The show featured a panel of four celebrities attempting to correctly identify a described contestant who has an unusual occupation or experience. This central character was accompanied by two impostors who pretended to be the central character. The celebrity panelists questioned the three contestants; and, the impostors could lie but the central character was sworn “to tell the truth.” After questioning, the panel then attempted to identify which of the three challengers was telling the truth. The host would conclude the show by saying the famous line, “Will the real ______ please stand up!”  The four panelists on the show often missed the real person, mainly because they had certain expectations of what the real person’s occupation or experience would be like.  And their expectations did not match the real thing.

People in the first century had expectations of what the Messiah would be like.  Their assumptions centered mostly in a manly Savior who would enter history and beat up the Romans, establishing the kingdom of God on earth with strong leadership over everyone.  And that was why they missed the Messiah because their expectations did not fit the real Jesus.

It is imperative we do not miss Jesus because we have certain expectations of who he is, and what he should do, based on our own experience, or on what we want, rather than what God is doing.

God is at work bringing all things under Christ’s authority. The kingdom of God expands and develops when people follow Jesus through genuine humility, confession of sin, and reception of grace. Satan and his demons are quite displeased when this happens because they do not want Jesus on the scene to bring deliverance.

The devil had his own aspiration to do away with Jesus so that Christ could not accomplish the mission of redeeming the world back to God. Wiley old Satan wanted the violent storm to kill Jesus. However, Christ’s authority and power overwhelmed the “natural” act. 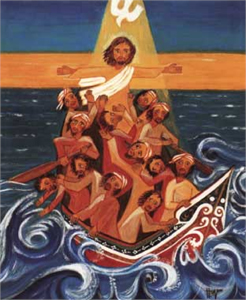 The real Jesus is, in truth, beyond our expectations. The emphasis in the story of deliverance from the storm is on the person of Christ. The people were surprised that even the wind and the waves obey him!  They were afraid because of the furious storm. But Jesus was sleeping, not the least bit fearful. The disciples woke him, and the original text of the story has just three short staccato-breathed words expressing their abject fear: “Lord! Save! Dying!” Jesus seemed to lazily awake and chided them for little faith, for their inability to recognize who he really was. The disciples’ expectations of Jesus were way too low!

Many people believe that God hears and answers prayer. Yet, sometimes our faith can be so small that, when God answers those prayers in ways far superior to our expectations, we are slack-jawed astonished by it.  Matthew’s Gospel records several instances of people being surprised by the real Jesus:

When Jesus had thrown out the demon, the man who couldn’t speak began to talk. The crowds were amazed and said, “Nothing like this has ever been seen in Israel.” (Matthew 9:33, CEB)

Everyone was amazed at what they saw and heard. People who had never spoken could now speak. The lame were healed, the crippled could walk, and the blind were able to see. (Matthew 15:31, CEV)

When the followers saw this [Jesus withering a fig tree] they were very surprised. They asked, “How did the fig tree dry up and die so quickly?” (Matthew 21:20, ERV)

They were surprised to hear this [how insightful Jesus is to the human condition]. Then they left him alone and went away. (Matthew 22:22, GW)

But Jesus said nothing in answer to Pilate, and Pilate was very surprised at this. (Matthew 27:14, NCV)

The real Jesus is more marvelous, wonderful, powerful, and awesome than we know. Jesus will take care of us; he will not let his people be destroyed.  When we truly grasp the real Jesus, and how much he loves us, there is no room for fear, only faith.

Even though the disciples’ faith was small, Jesus still responded to it with grace because even small faith is faith. Grace is undeserved help. Our Lord helps anyone who approaches him, whether with little faith or big. Our small faith is no obstacle for Jesus in delivering us from the storms of life.

I am wondering if you are presently experiencing a violent storm in your life. Please know that Jesus can bring peace.

Perhaps you have a besetting sin that dogs you every day. Jesus can deliver you.

It could be that depression follows you like a lost kitten wherever you go.  Jesus can bring new life and fresh joy to your life.

Maybe there is a relationship you have lost hope over. Jesus can restore it.

Perchance you think your neighbor, co-worker, or family member is too far from God to ever know Jesus. By now you know the response. Our expectations of Jesus are much too small!  We can pray big prayers because we serve a big and powerful God who has the authority to command even the wind and the waves!

When the real Jesus confronts the world, he confronts injustice and the darkness within human hearts.  Some people are crushed by their awareness of sin, disobedience, and guilt. Therefore, they respond by hungering and thirsting after true righteousness. Others respond by trying to domesticate Jesus in serving their own ends.

The Gospel of Matthew portrays Jesus as both a powerful and compassionate God. Christ has authority over all things, and uses that authority to bestow grace, even in the face of the smallest of faith in his followers. Jesus cares about people and seeks to deliver them from the dominion of evil.

So, may we participate with Jesus in his agenda for this world.  May we submit to his rule and authority. May we exhibit the same care, compassion, and concern for people as Jesus does. May we identify the real Jesus to stand up.

Lord Jesus, Son of God, I believe all things are possible through you; help my unbelief! Take my small and seemingly insignificant faith and use it to calm the storms in my life and demonstrate your authority even over the wind and the waves. Amen.