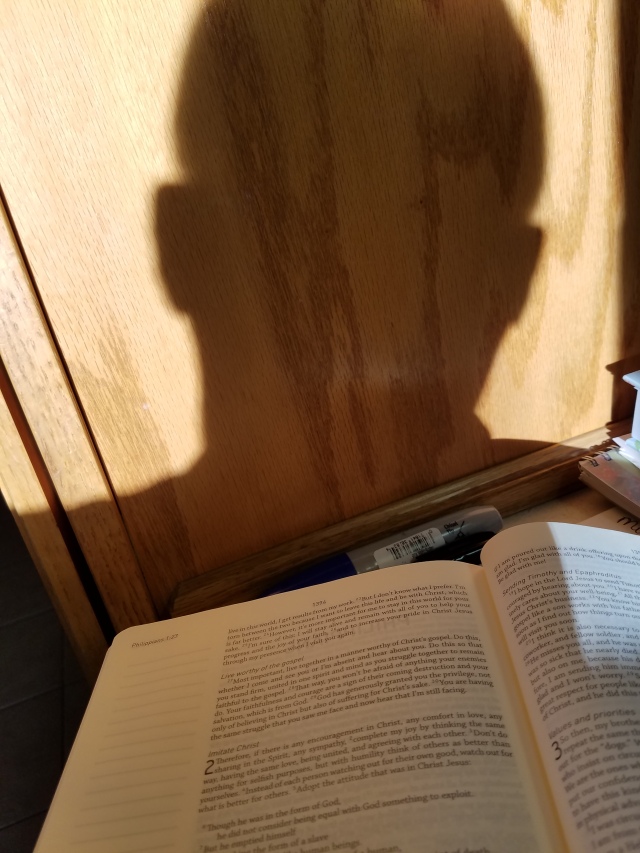 In my line of work, I meet a lot of different people.  Some folks are a delight to be around, others not so much; some people talk a lot, some barely any words, at all; and, many people are nice and civil in conversation, and some can be brutal with their words concerning others.  For the most part, I know what I’m walking into when I engage with another person because there are some common types of people.  But, once-in-a-while I find a person who is as rare as blood type AB negative (which is only 1% of the world’s population).  That person is one who has no shadow.

Even Peter Pan had a shadow, even though it usually wasn’t anywhere near his body.  Everybody has a shadow.  When the light strikes us, a shadow is created beside us.  The shadow is not so much us, but the dark reflection of us.  Now I’m not talking about physical shadows, but the common condition of people who only let others see their shadow, the nebulous reflection, and not the real self.

Here’s an admission: One reason I don’t go to very many Christian conferences, and even some churches, is that there is so much preening, posturing, and pretending going on.  Far too many people only show their shadow selves and only present a silhouette of their real selves.  Pastors’ Conferences, I might add, are the worst.  Shadows are everywhere.

The shadow self thinks the dark reflection is who he/she is.  The shadow has grandiose thinking, and believes that external behavior is who you are.  The shadow needs to be the up-front show for all to see, as to disguise what is creating the shadow.  When a person is overwhelmed by her weaknesses and has a difficult time looking at the real person in the light, she looks to the shadow self to serve her.  Keeping up the shadow for others to look at, instead of the real deal, becomes the modus operandi of life.  Other folks just rabbit hole themselves in an imposed solitary confinement and don’t come out.  They literally hide in their homes.  That way no one will see them, and they won’t have to deal with other people’s shadow selves.

Let’s get a solid biblical theological truth out there in the light for you to see, without any shadow: God likes you.  God loves you, cares for you, knows you intimately inside and out, and still likes you, a lot.  God created you in His image and likeness, and, despite any weakness, ignorance, and imperfection on your part, has demonstrated his enduring commitment by sending his Son, the Lord Jesus, to teach, save, and empower you in life.  God’s love is not only for other people, but for you.

The love of God is the light of the world – manifested, fulfilled, and demonstrated by Jesus.  The light shows all the imperfections, flaws, disobedience, and rationalizations.  The light exposes everything, but also creates the shadow.  This is where your choice comes into play: Will you embrace the light, or turn and face the shadow?

The true self knows God in her, and knows herself in God.  She believes she is united with Christ.  She doesn’t need to prove anything.  This rarest of person can say with peace and confidence, “I am who I am, just me, warts and all, with no window treatments around me.”  The laws of physics are suspended; there is no shadow.

To live into the true self is to be fully detached from your shadow, your self-image, and live into God’s image within you – which embraces both the good and the bad.  It is the peace and serenity of knowing that I don’t have to present a different self before others, and especially to God.

Evil relies upon denial and disguise, and lives in the shadows.  Righteousness trusts in the love of God, the person of Christ, and the presence of the Holy Spirit.  The shadow self improvises with personal ingenuity.  The true self plans to risk all on the grace of God in Christ.  The shadow refuses to change; it is always a dark reflection. The real person is a transformed person; like Moses, their faces shine with the glory of God.

The only way to live without any shadow is to be completely open to God, full face in front of him, and vulnerable to others.  When we enter a vital union with Jesus, his very rare AB negative blood is given to us and new blood engorges our spiritual veins.  Christ changes us.  Where there is fresh blood there is life.

You will meet a lot of different people, maybe today, maybe over the course of the next months and years.  Who are you to them?  Who are they to you?  What kind of self is there?  Are you in a place of shadows?  Will you live in the light?