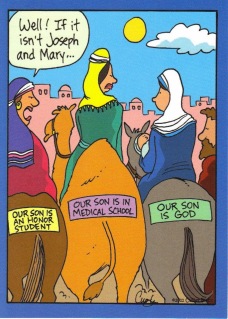 It can be easy for us to be diverted by all the shiny things about the holiday season, and put so much emphasis on the secular aspects of this time of year that we become overstimulated and feel like vomiting.  We need to have an Advent perspective, that is, to anticipate and sense the coming of the King and offer our worship and adoration.  We must come to the quite mundane and simple manger; the dull and unattractive place where God is found.  It is here that we find the hope of the nations, and the true desire of our hearts.
God preserved and protected the child Jesus.  His early life retraced the life of ancient Israel.  Like the patriarchs, Jesus went down into Egypt and would eventually go down and face hell for us in his crucifixion.  Like the ancient Israelites, Jesus was brought up out of Egypt and would rise from the dead bringing freedom from sin and death once for all in a New Exodus.  Jesus is our King, the promised One of Israel and of all the nations; Jesus is our salvation, the fulfillment of all that we hope for (Matthew 2:1-18).
Jesus is the special God-Man who secures salvation for us.  God preserved Israel from Pharaoh’s wrath, protected Jesus from Herod’s wrath, and His kindness and loyalty extends to us as His covenant people in preserving us from the wrath of the devil who seeks to keep as many people as possible in the realm of darkness.  Our hope is in the Lord Jesus who has conquered the devil; and, he did it by first establishing a beachhead on this earth through his incarnation as the Son of God.
After Jesus was born, King Herod went about massacring innocent toddlers in order to ensure the destruction of Jesus.  Behind his atrocity was the devil himself who knew that Jesus was the coming King who would one day bring salvation.  The satanic agenda was set in place.  Reflecting on a vision of Christ’s birth, the Apostle John stated in Revelation 12:  The dragon stood in front of the woman who was about to give birth, so that he might devour her child the moment it was born.  She gave birth to a son, a male child, who will rule the all the nations…. And her child was snatched up to God and to his throne.
What Satan does is to war against God’s Son and God’s people, whose roots go all the way back to the first prophecy of Christ in Genesis 3:15 after the Fall of man:  And I will put enmity between you and the woman, and between your offspring and hers; he will crush your head, and you will strike his heel.  There has been constant enmity since the Fall of humanity, between the serpent and the seed of the woman, with the Israelites in the Old Testament constantly being threatened with extermination and tempted to conform to pagan ways.  Herod was just another in a long line of demonically animated men trying to perpetuate the kingdom of darkness.  We must take this threat seriously because the devil knows that his time is short; a second Advent of Christ will take place and final judgment is coming.
Satan’s most powerful weapon, death, has now lost its sting because of Jesus.  Christmas is a hard time of year for many people, filled with depression instead of joy, grieving over lost loved ones for whom you will not spend another Christmas with.  But there is a reunion coming, the hope of a bodily resurrection in which we will be with Jesus and God’s people forever.
This time of year with all its parties, shopping, and crazy schedules, Christmas is stressful.  Even in the happiest of families, reunions and get-togethers can be difficult as old hurts resurface and adults revert to childish ways.  So, let’s come back to the first Christmas which was the beginning of the end for evil on the earth.  We, as believers in Jesus, are part of God’s victory – we overcome the evil one by the blood of the lamb, admitting that Christ’s incarnation was essential for us.
Just as Jesus made a radical break with his former life in heaven through the incarnation, we, too, must break with our old way of life.  Let’s not just celebrate Christmas, not just endure it, but confess that we need this Advent of Christ because apart from it we are lost.  God will save his people through this child Jesus.
The greatest gift of all we can give this year is the gift of the gospel of grace.  People need the Lord Jesus, and all of scripture points to him because he is the only answer to the ills and desires of this world.  What I want for Christmas more than anything is to see Jesus firmly take root in our hearts by faith.