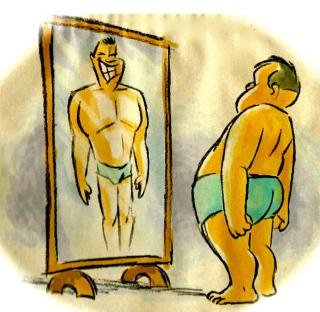 Back in the day we kids used to say to someone who was full of himself: “well, aren’t you just hot snot!”  The problem was that we usually thought more of ourselves than we should have and took the moral high ground even as we detected pride in another.  The fact is we are all targets for the temptation of self-deception.  King Saul in the Old Testament was the epitome of one who paid lip service to God and thought himself faithful, but never could bring himself to see that he was a disobedient clod and in need of coming clean about his true character (1 Samuel 15:1-26).
Many followers of Jesus are surprised when they end up in trouble.  They never saw the major inconsistencies of their lives, and did not take the preacher’s sermons and a well-meaning friend’s rebuke to heart because the message was really needed for “that other person.”  Too many of us Christians actually traffic in lies rather than truth through offering rationalizations, assessing blame on others for our problems, and evading responsibility.
When confronted squarely with our own wrongdoing, instead of trying to wriggle out of it by believing we aren’t as bad as other people, there is a much better and biblical response:  own up to it, and receive God’s grace.  The basis of grace is the cross of Christ, and that grace is most often dispensed through others.  Dietrich Bonhoeffer, the German Christian who resisted the evil of Hitler and chose a life of radical discipleship, had this to say:
“A man who confesses his sins in the presence of a brother knows that he is no longer alone with himself; he experiences the presence of God in the reality of the other person.  As long as I am by myself in the confession of my sins, everything remains in the dark, but in the presence of a brother, the sin has to be brought into the light.”
If we easily confess to God something that we would never think of sharing with a trusted friend or pastor, we are back to thinking too highly of ourselves and of the opinions of other people and not highly enough of God’s grace designed to shoo away the snakes of pride that slither about our feet.
We must face our own addiction to self and a false self-image, and create a love for the truth of grace.  Deception can come in many forms, but the self-deceiver is in a special need for healthy spiritual introspection.  Are you willing to speak honestly about your own struggles, weaknesses, and shortcomings?  Or will you rely on reading a wimpy blog post to substitute for genuine and honest confession?
God is glorified not when we are perfect or give the illusion of perfection; He is glorified in the struggle to live a holy life with a group of like-minded believers who have each others backs.  Wise church and ministry leaders will take care to cultivate a culture of confession throughout its organization.  So, may you have the courage to pursue hard after grace and find in Christ and his people newness of life.