Be a good citizen. All governments are under God. Insofar as there is peace and order, it’s God’s order. So live responsibly as a citizen. If you’re irresponsible to the state, then you’re irresponsible with God, and God will hold you responsible. Duly constituted authorities are only a threat if you’re trying to get by with something. Decent citizens should have nothing to fear.

Do you want to be on good terms with the government? Be a responsible citizen and you’ll get on just fine, the government working to your advantage. But if you’re breaking the rules right and left, watch out. The police aren’t there just to be admired in their uniforms. God also has an interest in keeping order, and he uses them to do it. That’s why you must live responsibly—not just to avoid punishment but also because it’s the right way to live.

That’s also why you pay taxes—so that an orderly way of life can be maintained. Fulfill your obligations as a citizen. Pay your taxes, pay your bills, respect your leaders. (MSG)

Back in the day (way back!) when I was in elementary school every student received a grade on their report card for “citizenship.”  Even further back, my Dad’s report cards had grades for “deportment.” Both citizenship and deportment were words used by the public-school system to gauge how well individual students conducted themselves with the teacher’s authority, behaved with fellow students, and handled the responsibilities of their studies. It was a grade given for the overall obedience and submission of students with their duties and obligations, or the lack thereof.

Today’s New Testament lesson is one of those Scripture texts which has been used and abused throughout history. Since we no longer give grades on citizenship and deportment, a careful consideration of both what this biblical passage is, and is not, must be observed.

What Citizenship is Not: Irresponsible and Disobedient Injustice

Advocating a favored political philosophy or party to the point of avoiding a rival party or power and resisting their government through lack of submission, being uncivil and disrespectful, and stubbornly disobedient is poor deportment and will earn an “F” from God on the report card of life.

Picking-and-choosing which laws I will obey and which ones I will not is extremely far from the biblical teaching given. Rebellion against laws I do not like will only result in getting punished from the principal for being shortsighted and stupid.

On the other hand, blind and unthinking adherence to a government is irresponsible and can be unethical. Unjust leaders and immoral laws which merely champion certain people and not the common good of all need to be dislodged and dismantled. When one simply says, “I’m just doing my job,” or “I don’t want to get in trouble,” in the face of unjust laws and leadership, then we are complicit in the perpetuating of the evil person or system. Blind obedience keeps abusive people in the classroom.

Vigilante-ism is a form of “recess justice.” It is a refusal to accept what is taking place and takes matters into one’s own hands. Just before explaining citizenship, the Apostle Paul said, “Do not take revenge but leave room for God’s wrath,” and, “Do not be overcome by evil but overcome evil with good” (Romans 12:19, 21). There is no place for vigilante justice in the kingdom of God. At its basest form, vigilantes are resisting God’s justice and being extremely impatient with the divine plan. 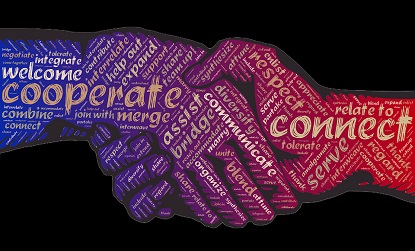 What Citizenship is: Responsible and Submissive Justice

Submission is a choice. The word “submit” in the New Testament means “to place oneself under authority.” In other words, to submit to another person, group, system, or government is a human volitional choice. Obedience through coercion, as in totalitarian regimes, is not submission – it is oppression.

Good citizenship begins with humble submission to governing authorities who are trying to do their best and have everyone’s best interests at mind with responsible laws which benefit the common good of all. Most parents and school boards would do well to remember that.

Justice is primarily about provision, and not about being punitive. I realize that many, if not most, people use the term justice in the penal sense – wanting convictions and incarcerations when someone has committed a crime against the state and/or humanity. And, although this is a very important work of government, the biblical sense of justice is about provision – giving people their rights to life and liberty and ensuring that we all exist in an equitable form of union together as one people.

When people fall through the cracks of bureaucracy and do not have what they need to survive, let alone thrive, then this is an injustice which needs remedy sooner than later – without putting it off to another election cycle. So, put the spanking paddles of shame away (yes, kids at school got the paddle in my day) and instead find ways to uplift and support one another.

Responsible citizenship involves a proper deportment of volitional submission, careful obedience, proper payment of taxes for the benefit of all, and providing due respect to public servants. Keep in mind that the Apostle Paul originally wrote about how to conduct ourselves with government smack in the middle of a Roman Empire which was often fickle and careless about the rights of Christians, Jews, and others.

We submit not because we must, but because it is the right thing to do. To do otherwise is to not only violate the law but our consciences, as well.

Our consciences also need to be clear and clean about the need for justice in this old fallen world of ours. Christians have a continuing and outstanding debt to love one another. Having justice for some and injustice for others is not going to cut it with a Just God. Our Creator and Sustainer desires that every single individual on planet earth – regardless of race, gender, ethnicity, sexual orientation, class, or any other human contrived social construct – have their needs met without prejudice, favoritism, or cronyism.

God’s original plan for the world includes an egalitarian society, so we must be careful to remember and work toward the ideal, while at the same time dealing graciously and resolutely with the realities of injustice all around us. I wonder what grade Jesus would give us so far this year for our deportment.

Lord Jesus Christ, Son of God, just as you welcome us into your kingdom, help us to love each other deeply,
offer hospitality to one another without grumbling, encourage each to use the gifts we have received to serve others, and submit to the governing authorities with the good citizenship you have provided us so that every one of us will be a faithful steward of God’s grace in its various forms. Amen.

3-Minute Chat with Chaplain Tim: Leading with a Limp